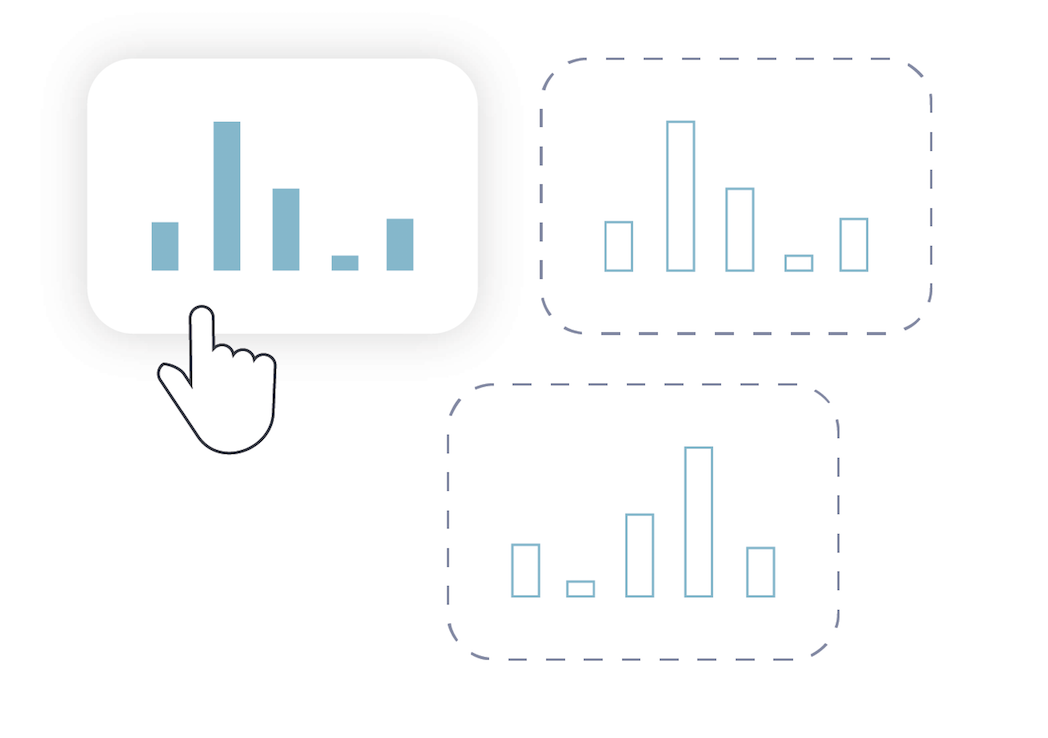 Drag + drop elements in Protobi to change the order of questions or create different views of the same question.

When your drag + drop a dialog with three options pops up:

In the main panel we can drag S1 between two charts to move it. The yellow line marks the new spot.

When you drag an element make sure you select the blue rectangular pill with the question's displayKey (i.e. S1). 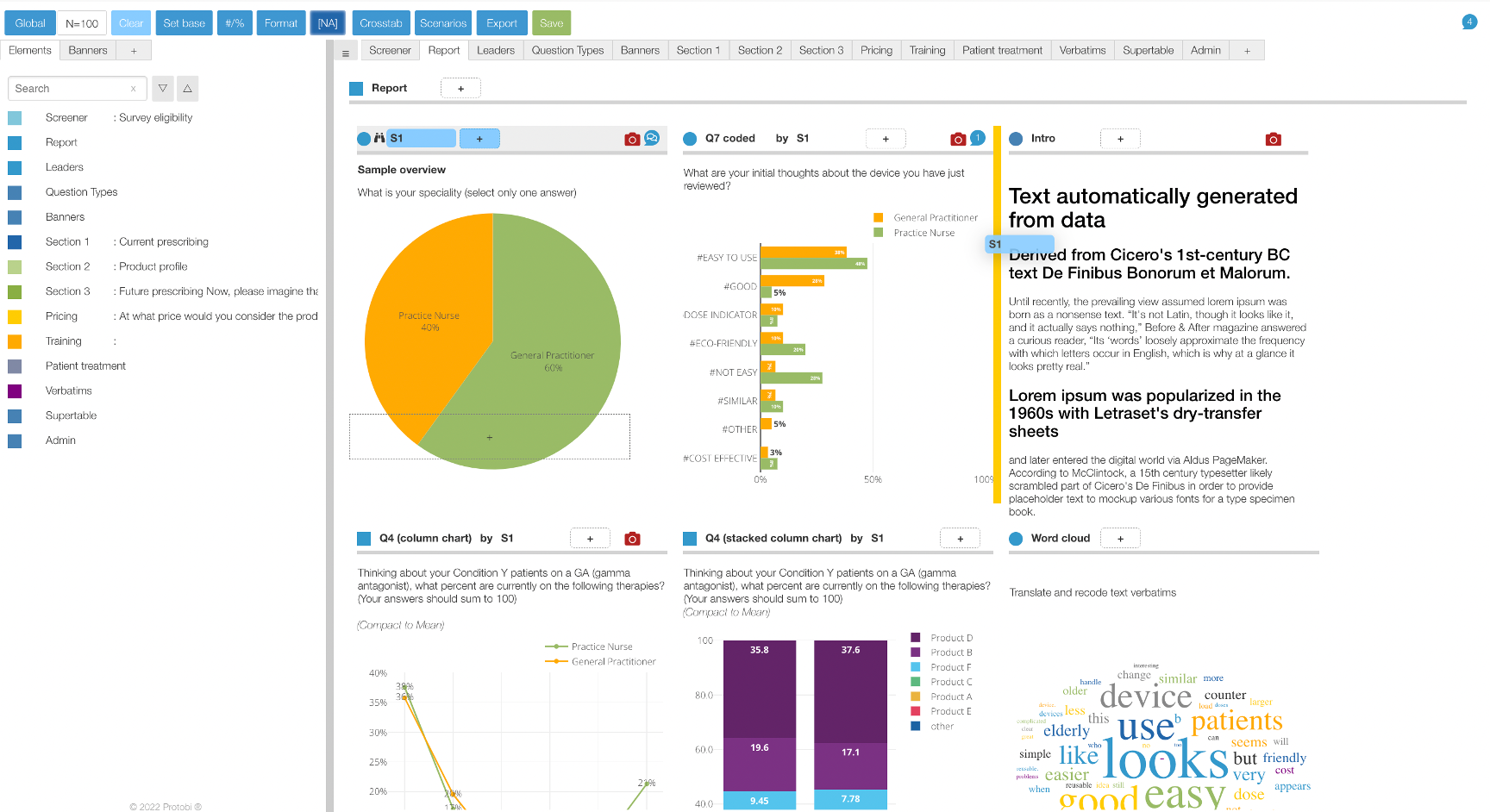 You can also drag elements within the tree to move them. 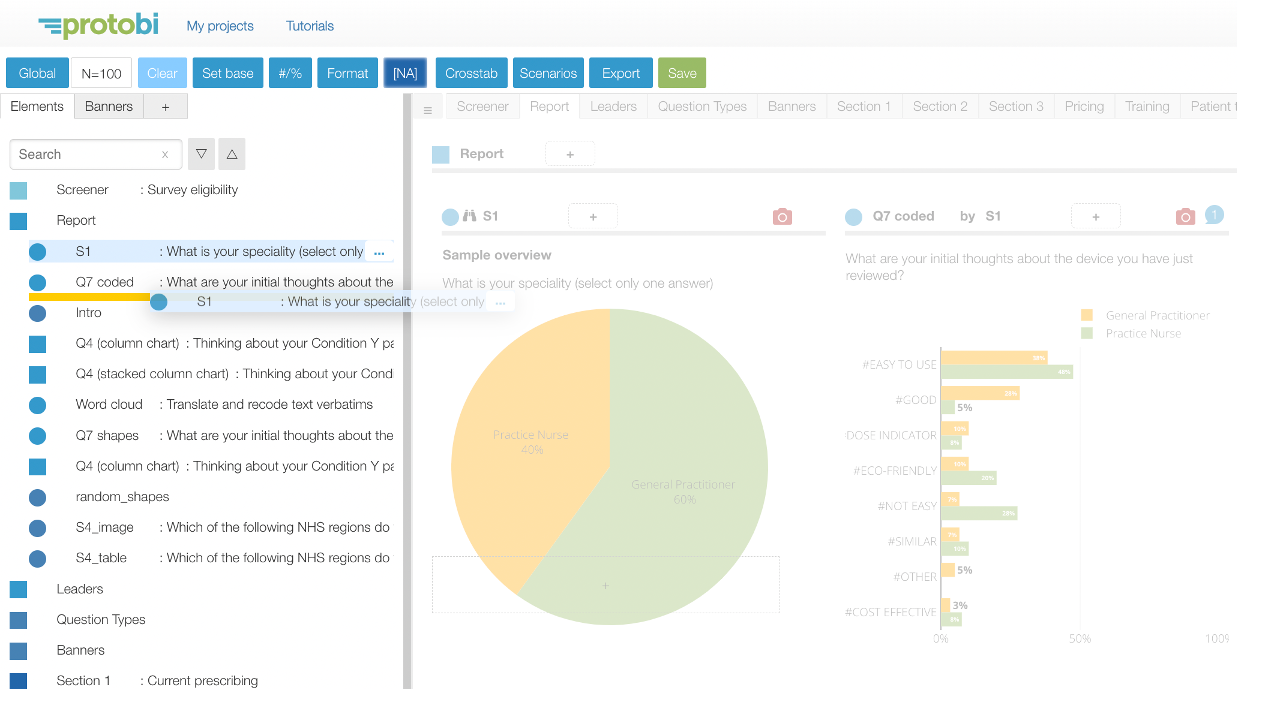 If you drag an element onto a group instead of specifying a position, it will place the element last in that group. 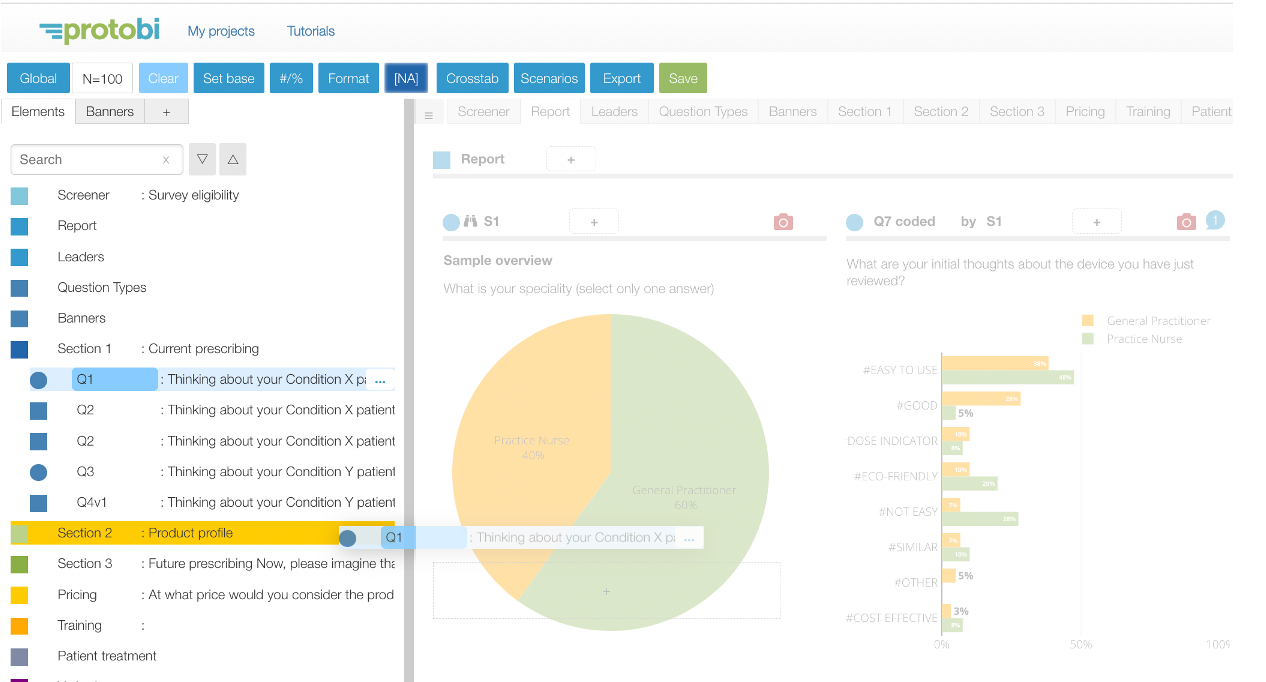 Drag + drop elements from the tree into the main panel

You can also drag from the tree into the main panel. Drop between elements to specify a location. 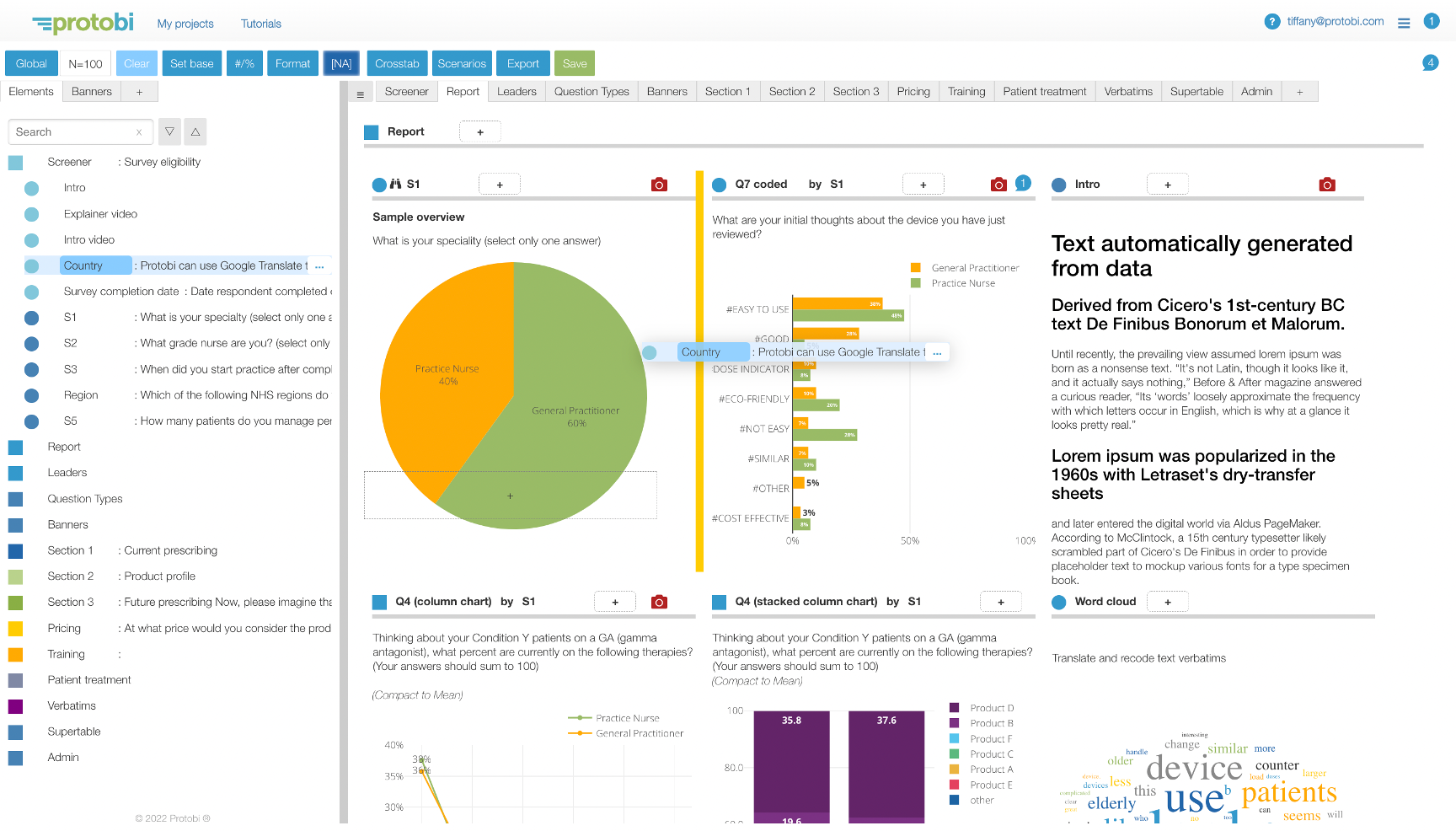 Drag to the "+" sign to add the element to the end of the tab. 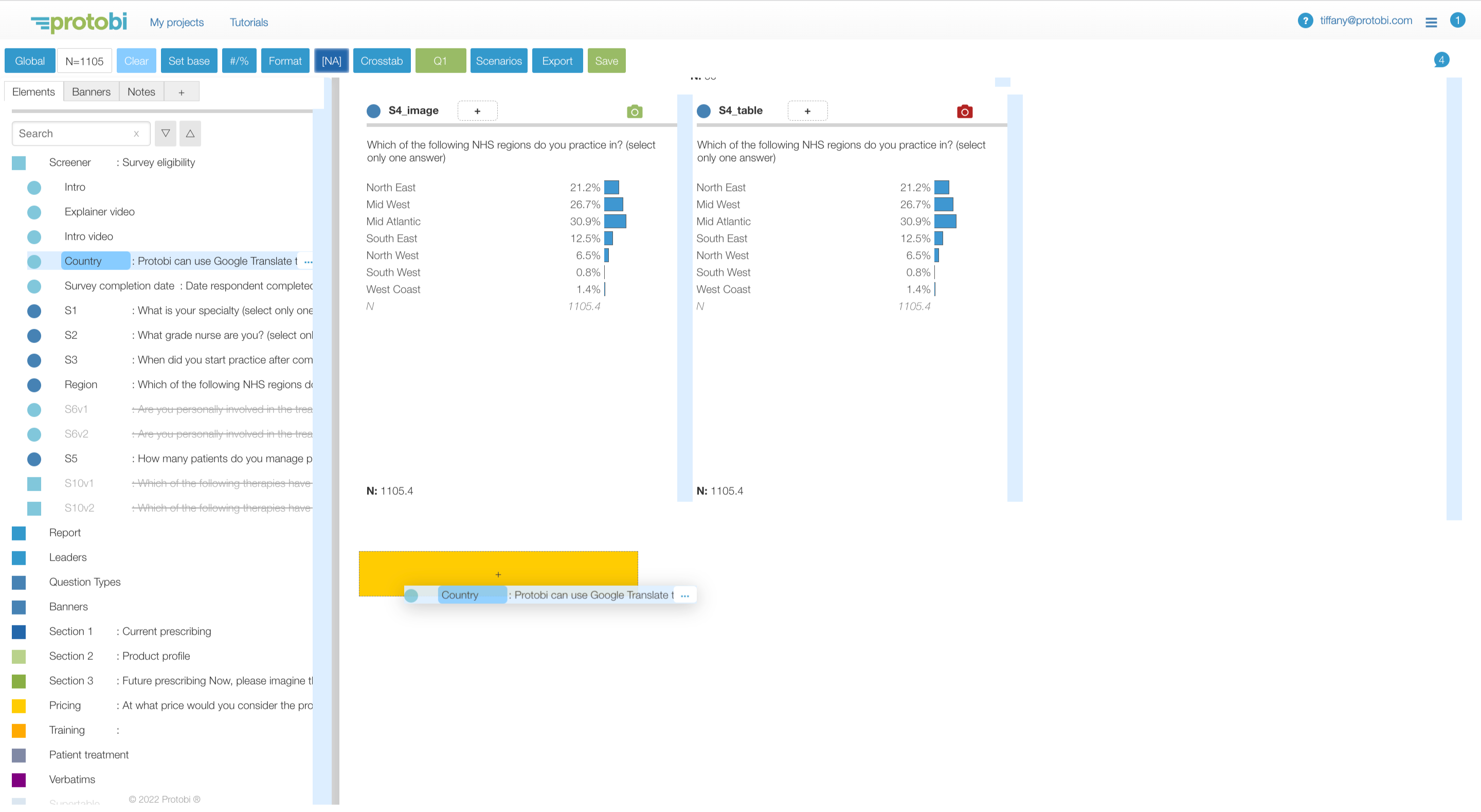 Drag + drop elements from the main panel to the tree

Protobi recently enabled moving elements from the main panel to the tree. 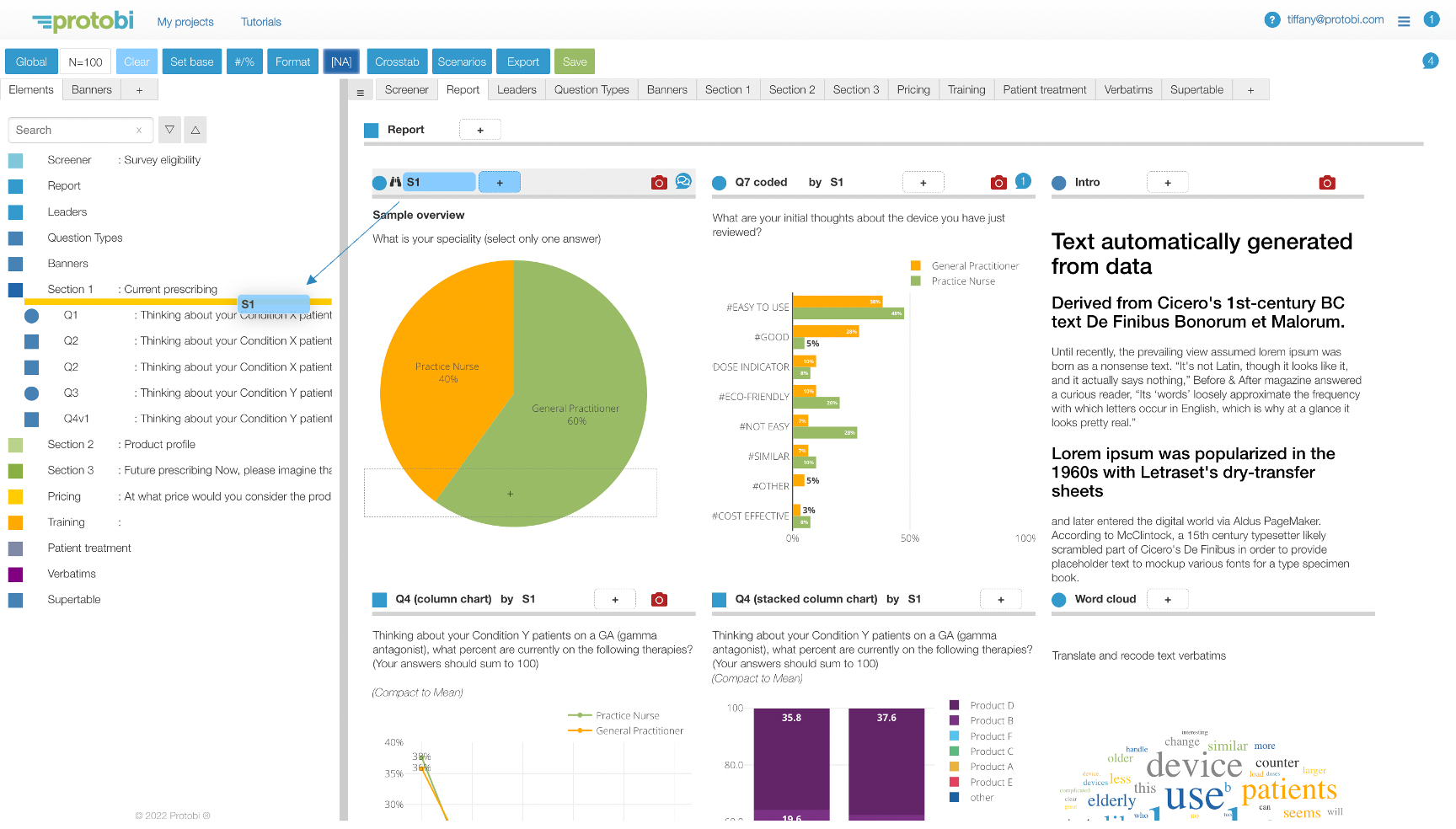 The key difference is that mirror copies are the same element referenced in multiples spots and clones are independent elements that point to the same data column.

Mirroring an element just means you're showing the same chart in more than one spot. Mirror copies have the same key, if you edit the element in one place it will change it everywhere.

Because they share a key, you cannot hide or delete a mirror copy without affecting the original element and vice versa. You can remove an element from a group's list of children and that will delete it from one group without removing it from any other groups where it's referenced. 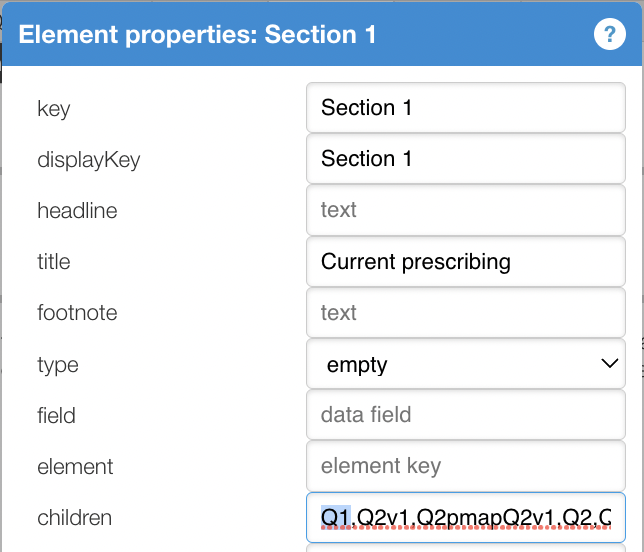 Cloning allows you to create an independent copy of an element. Cloning is useful when you want to see a question in a different chart type or create a banner element from a question without changing the original chart.

You can drag + drop to create a clone, or select the element, press the "Advanced" button in the toolbar and choose "Clone". 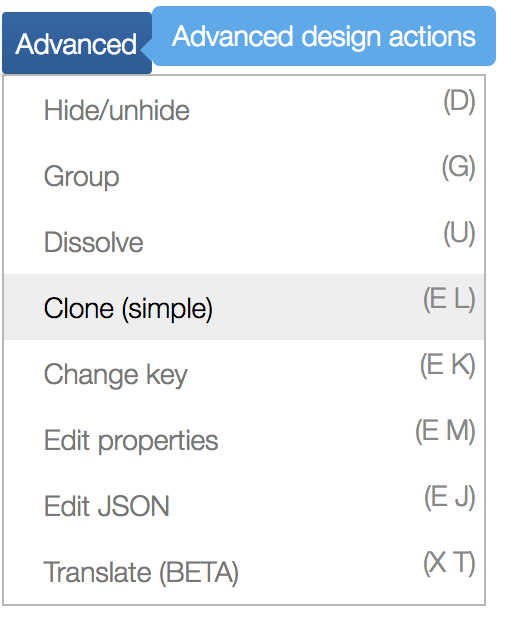 Protobi prompts you to give the new element a new key. The key cannot be identical to any other key in the project. 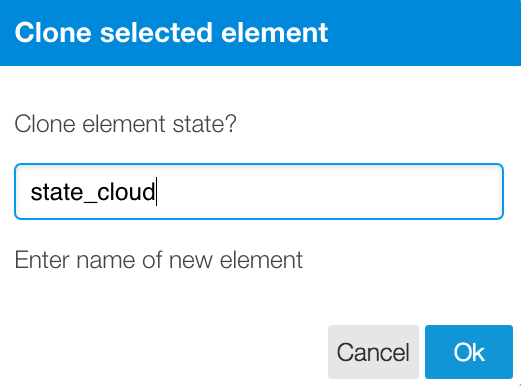 Clone to create a different type of chart 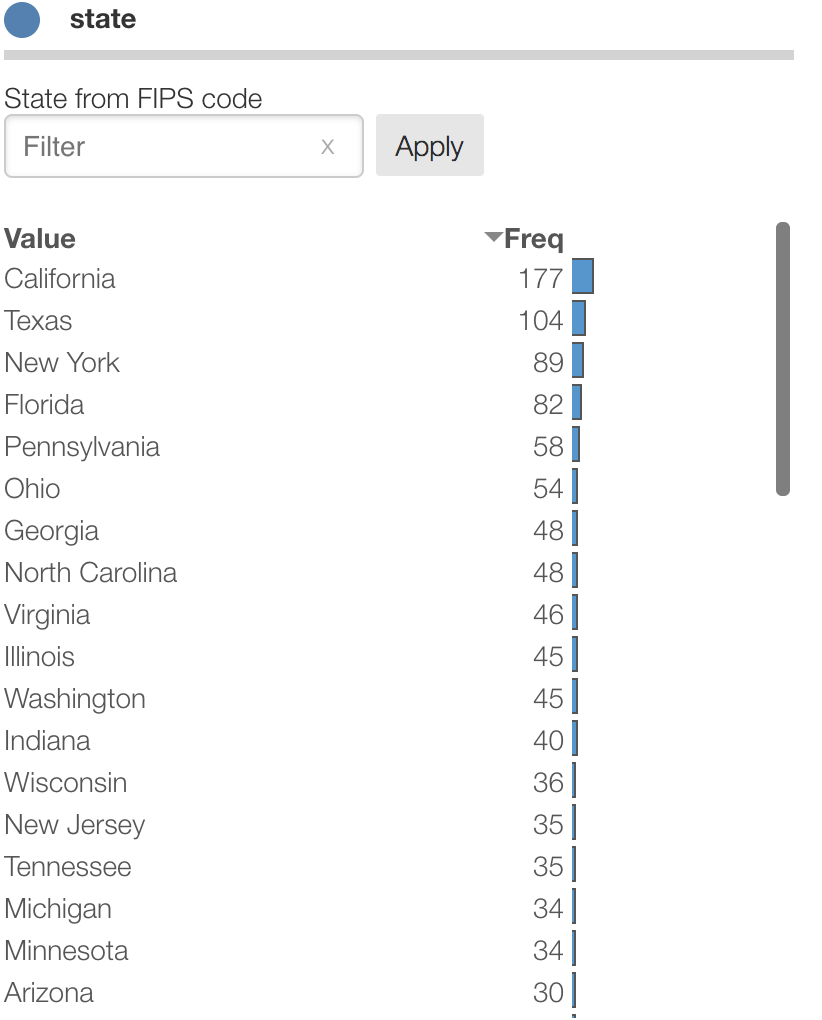 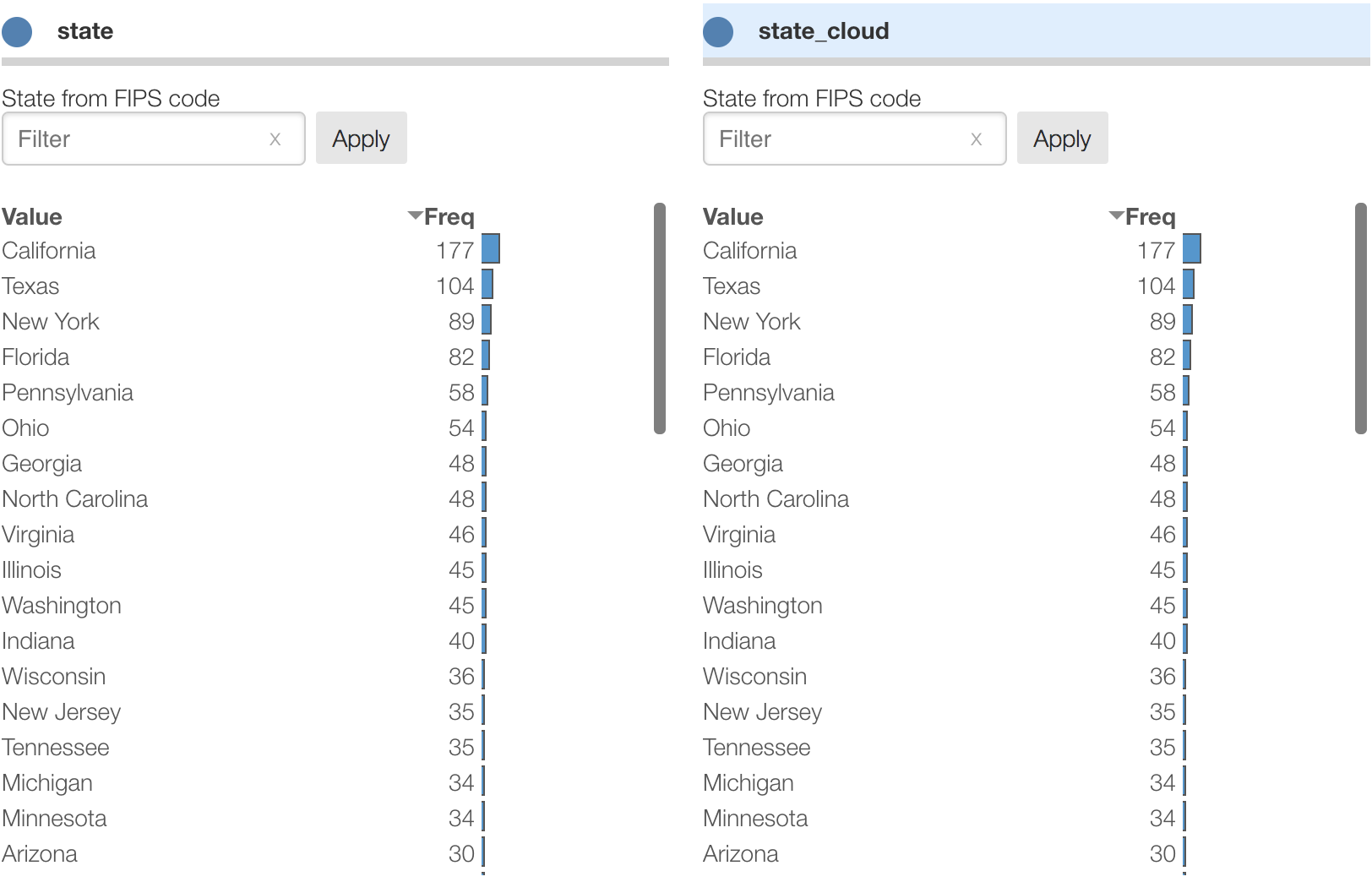 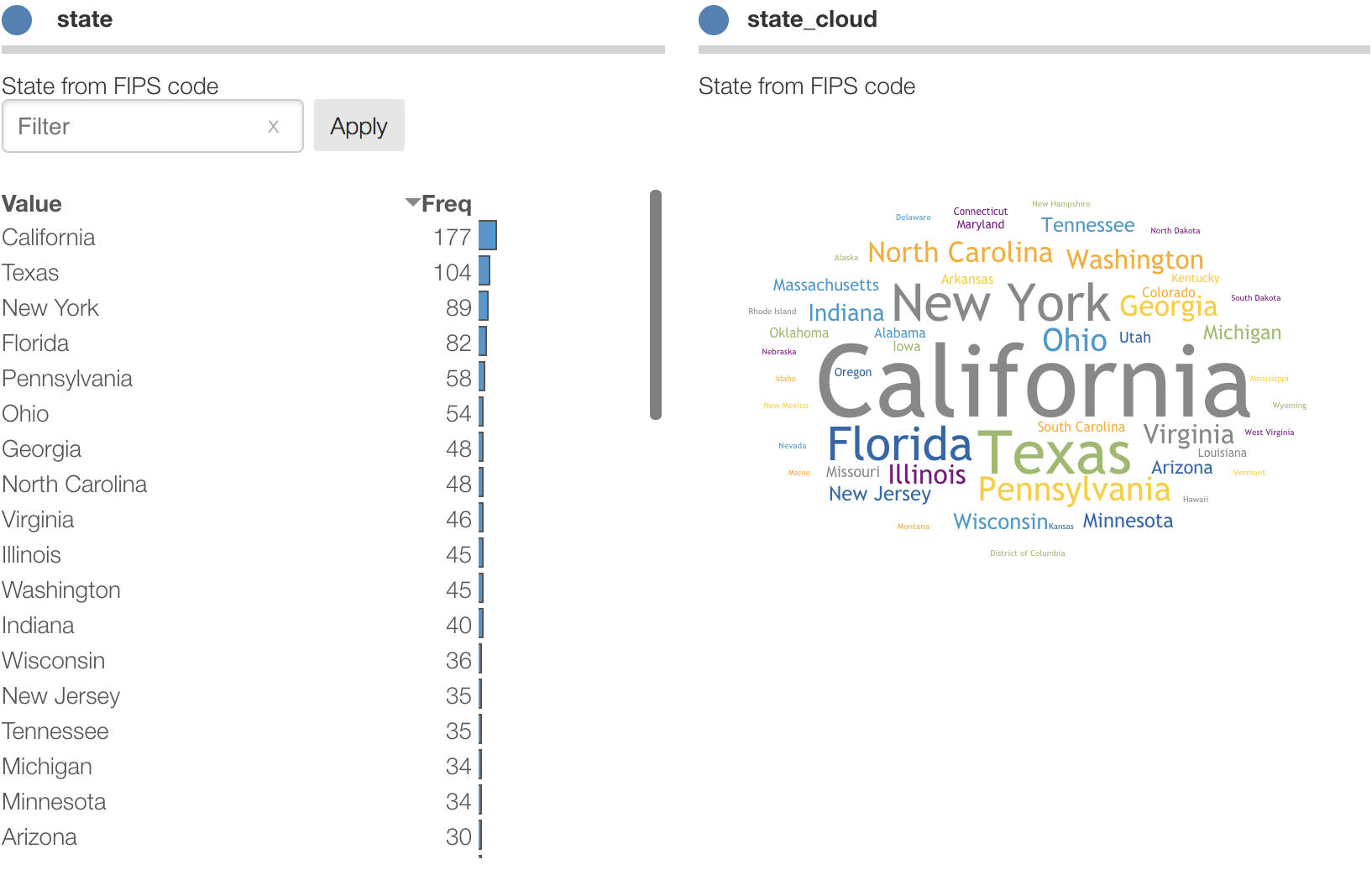 When you clone a group you can clone just the parent group (simple clone) or recursively copy its child elements (recursive clone). 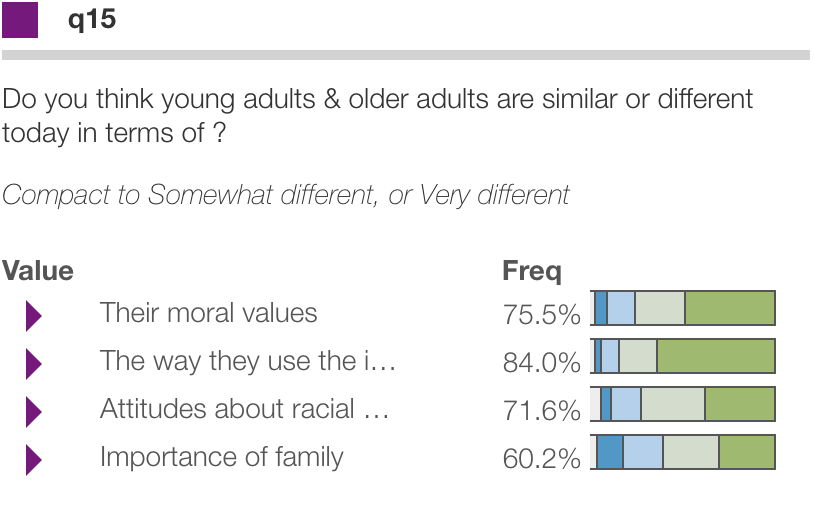 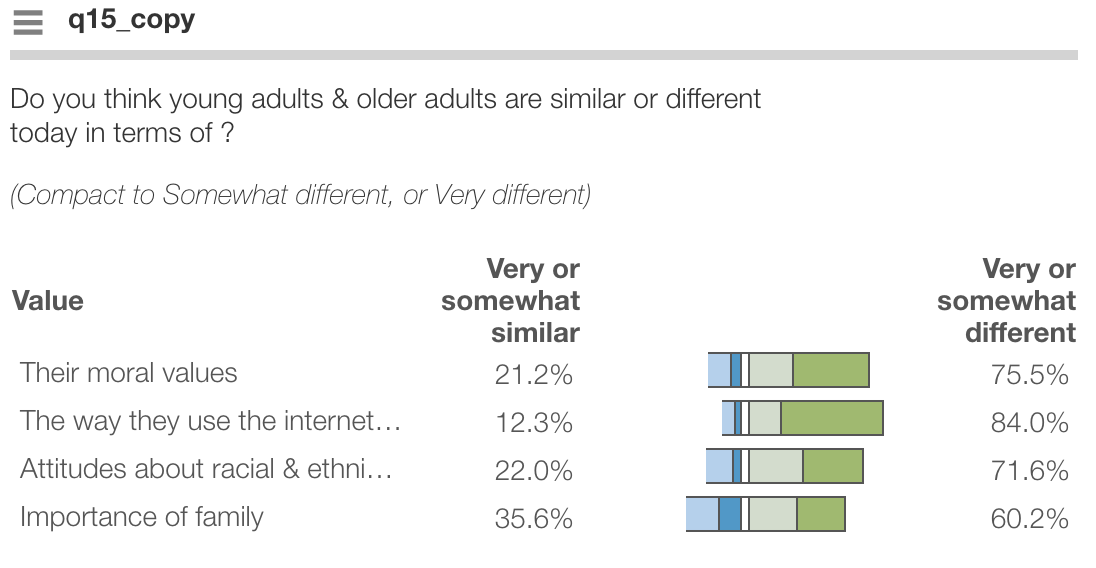 This will not only clone the parent, but also create independent copies of all the children. Changes to both the parent and children in this type of clone will be independent from the original group.

Rather than specify a new key for the clone element, for recursive clones you specify a prefix that will be prepended to each element's key to generate new keys.

Some changes parent elements propagate down to its children. This includes changing color, format, recodes, filters and crosstab columns. You may want to modify the group without those changes propagating down to the child elements.

In simple clones, both parent groups refer to the same children. If you want to set a specific format or filter on the cloned parent but you don't want the children to reflect these changes under the original group, turn heritability off. 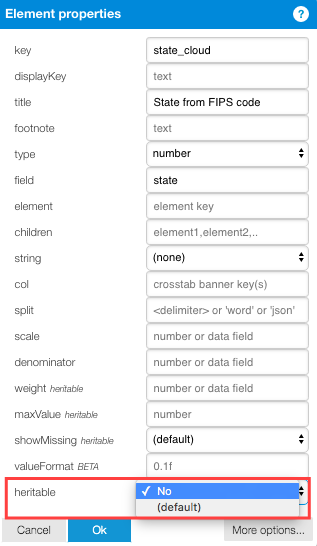 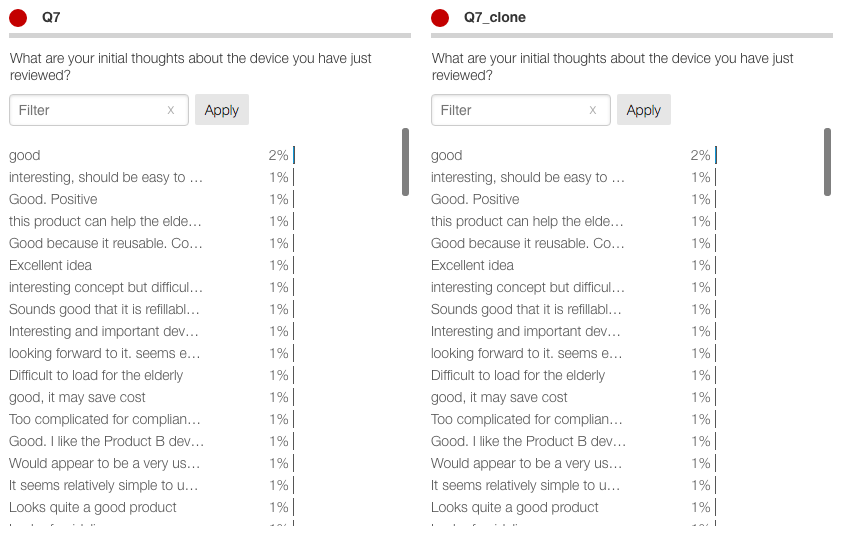