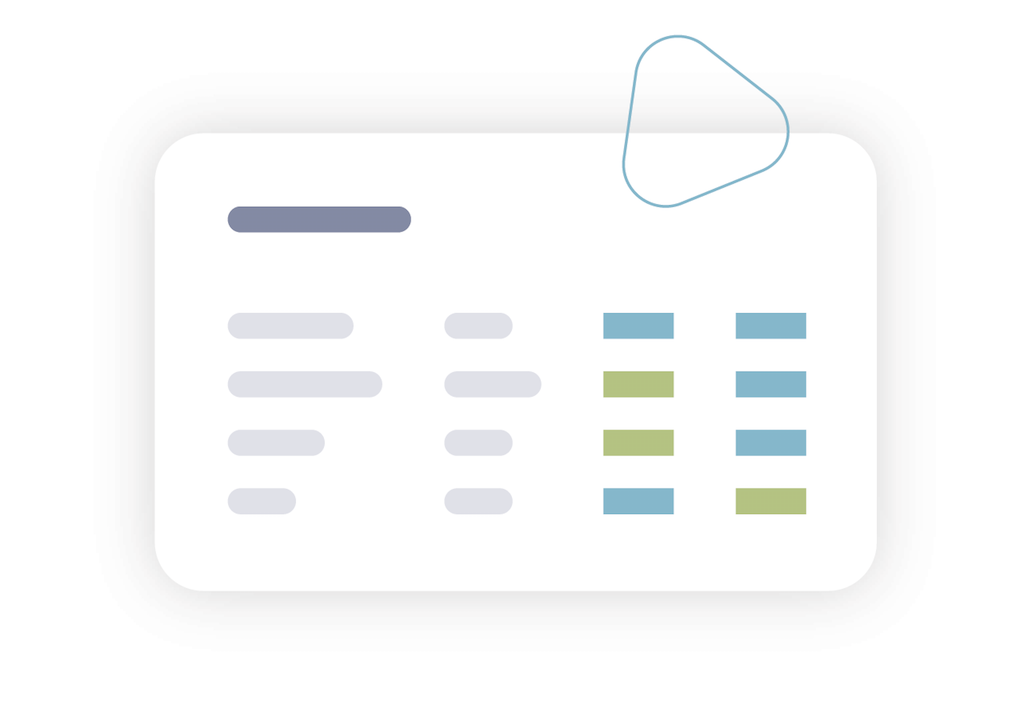 Then again, maybe you just want to align a grid of questions neatly in a table.

A PairedTable allows you to neatly display collections of questions together, and run pairwise comparisons for stronger statistical tests.

Below is an example from Pew Research's Gender and Generations survey. Each respondent rated how similar they perceive different groups: 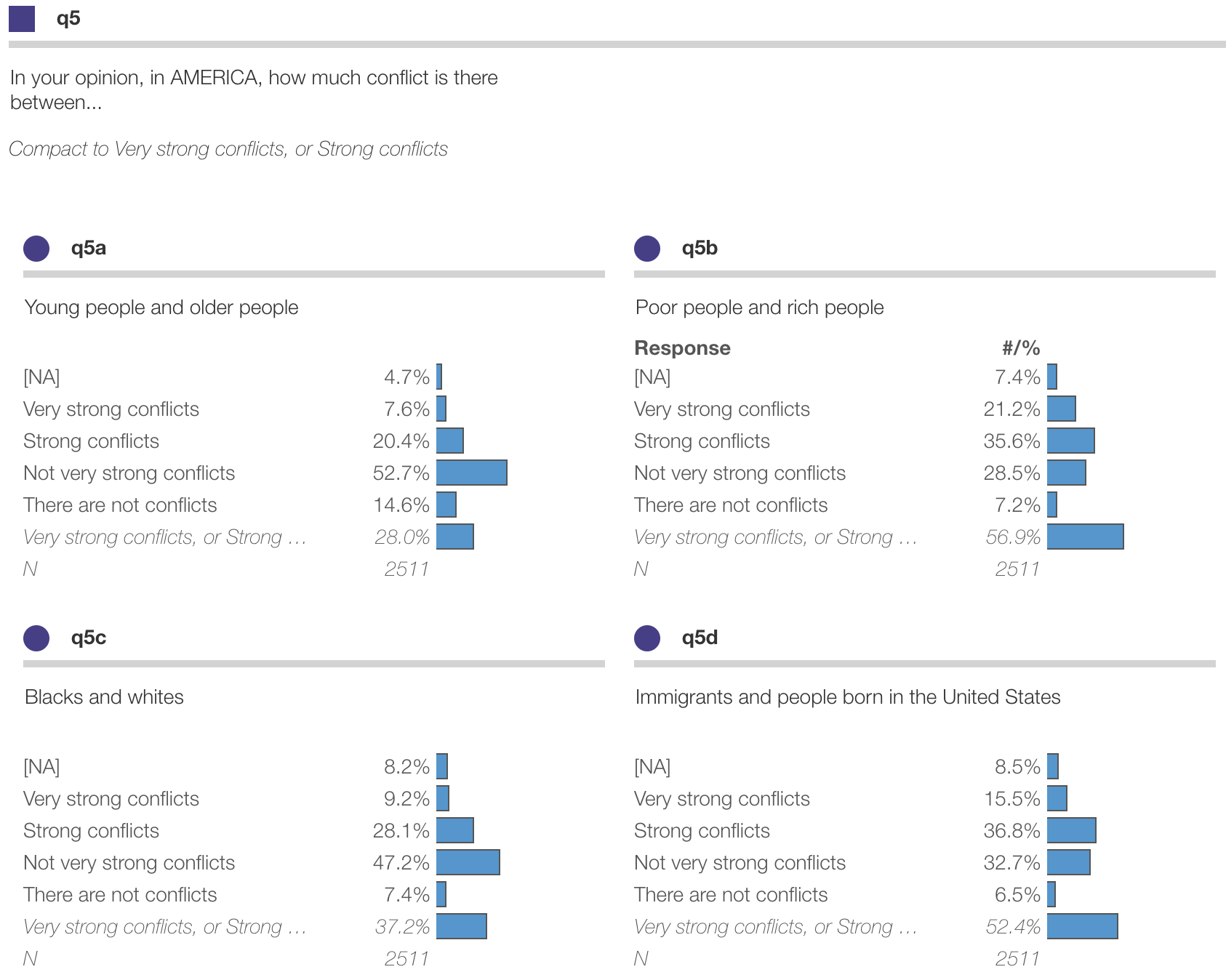 The difference in responses seems sizable, but is it statistically significant? That's where PairedTables can be useful.

In a PairedTable, each column is compared with each other individual column. Blue column labels highlight statistically significant difference between questions.

Cells show counts/frequencies for all respondents, but each statistical test to compare whether differences between two questions are significant considers only respondents who answered both questions.

You can turn pairwise testing off in "Additional options", press the green checkmark to deselect "testPairwiseSignificance". A blue x indicates an option has been deselected. 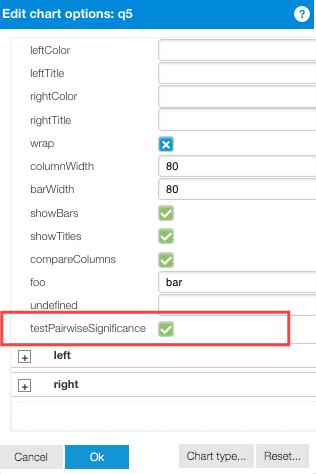 Alternatively, press the blue square edit icon and select "Edit JSON..." and in the JSON, specify a chartType attribute:

The default is to show each variable as a column and each response value as a row. This makes the view look more like a traditional crosstab.

However, if you have many variables and fewer response options you can transpose the table by choosing swap under "Chart options" in the chart dialogue.

This will yield a transposed table with one row per question and one column per response option.

Here, the statistical comparisons are between rows rather than columns:

Protobi can compare columns as either “Independent samples” or “Paired samples”.   Paired sample testing is more sensitive (i.e. it is more likely to show a small difference as “significant”). But it only applies when both columns have the same “base”, in other words, when every respondent who answers one column also answers the other.

Independent sample testing is more conservative but it applies when two questions are answered by different respondents.  To enable paired testing, open the Properties Dialog and select “testPairwise”.

In the example below we see two questions where the result is 50% green in one and 60% green in the other.   But in the first case, we don't know who is who,  all we know is that it  question says 50% is green, and in the other says 60% is green.  In the second case, we can “pair” the samples, and can see if someone switched values or stayed the same. 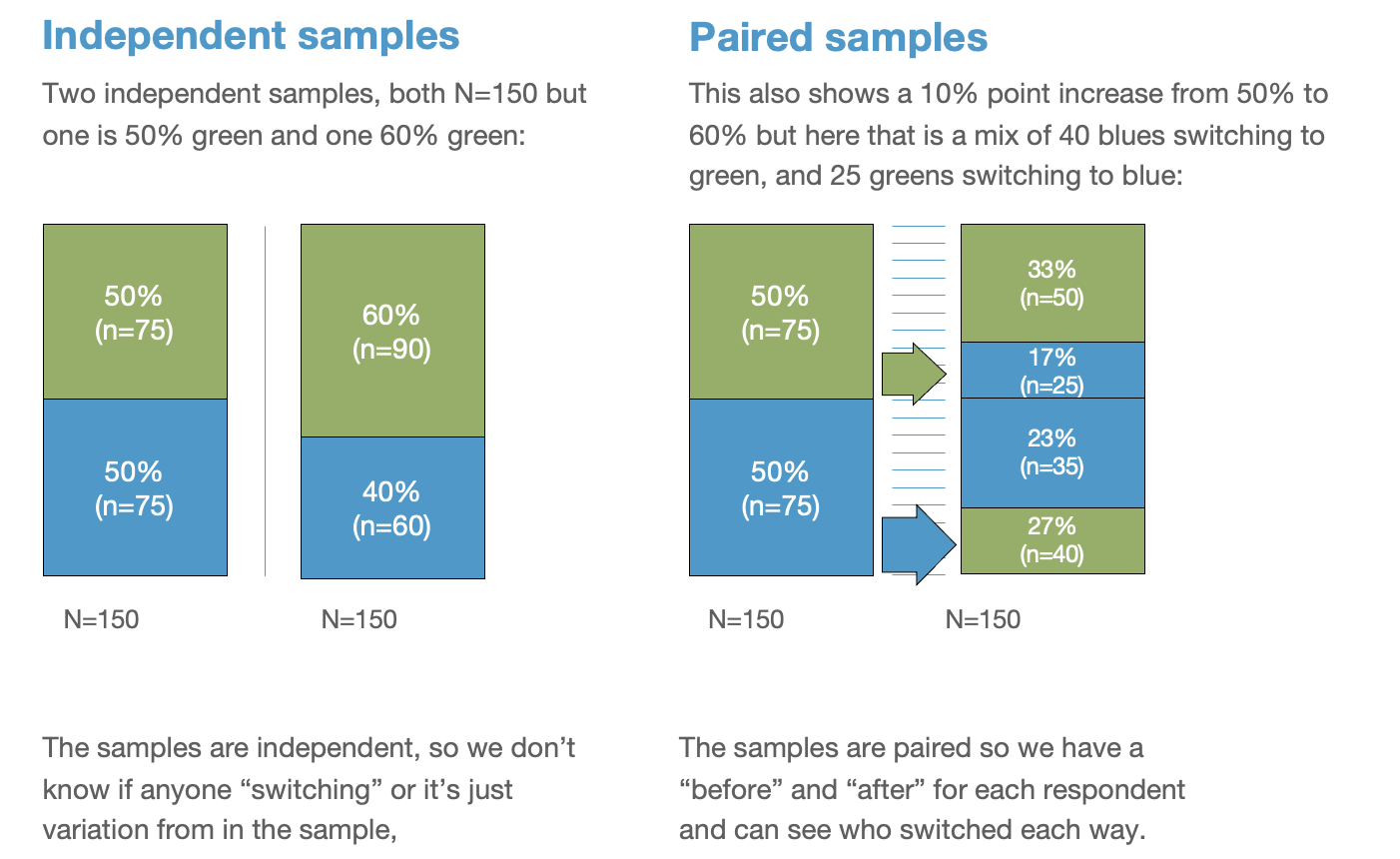 The Z tests is the most common test for proportions between independent samples:

This statistic theoretically has a standard normal distribution for large samples.

There are many variations of this test, particularly if either the sample size or the population size is small. Protobi uses the standard Z test, when both n1 and n2 exceed a minimum sample size, which defaults to 20 for most projects.

McNemar’s test is designed to test differences in sample proportions in paired samples.  This statistic theoretically has a Chi-Square distribution for large samples.   This test also has variations for sample and population sizes.

Protobi uses McNemar’s test with Edward’s Correction for Continuity, which is the variant most commonly today, including the language R :

The following example shows three variations of two questions, which we might call “before” and “after” .

In the first example, the samples are independent.  We can't say who's who or who switched.  All we can say is that out of 150 respondents in each sample, in the first one 50% were green, and in the second 60% were green: 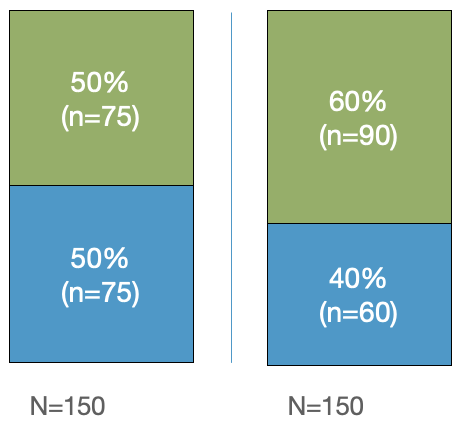 This example shows the same 10% point increase from 50% to 60% but here all of that difference is due to 15 blues switching to green: 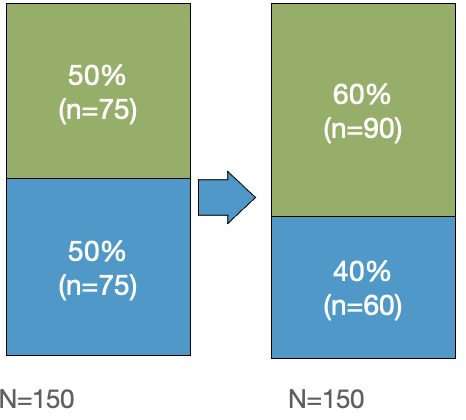 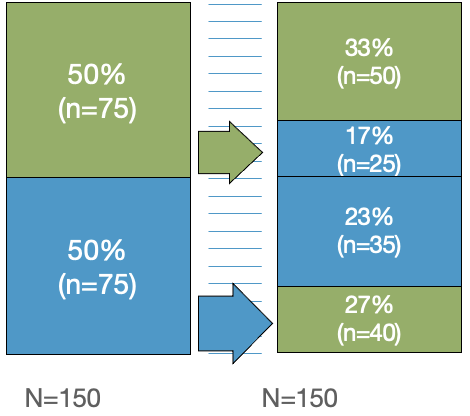 This tutorial describes paired tables and the optional stats tests that can be applied.  For your project, we'll be happy to help you set up the appropriate settings for your project at support@protobi.com

Here’s how to to compute candidate market segmentations using R and profile them ...